Posted on December 5, 2019 by gracekannberg

My creative plan for my comic was to make an interactive experience that is both creative and unique for the viewer. This is why I chose to use Illustrator and Wix for my project three comic. I felt as though these two platforms would help me best in making the comic and designing the layout for web viewing. Illustrator allowed me to create the comic that I had in my head that wasn’t limited to items I could find, like Photoshop would have. Using Illustrator, I felt that Wix would allow me to upload the panels I had created easily.

This is the first time I have used the templates in Wix to create a webpage. Overall, I felt that the experience was fun and helped me get a better understanding of how to publish professional websites.

Some current possibilities of web pretentions that inspired me were the capability to scroll down. After looking at Bikram Addict by Eroyn Franklin I saw how scrolling down can affect the way a comic is read and how it adds an interactive element to it. This is why I was inspired to use this in my comic. When looking at the limitations of web presentation I felt inspired by the simplicity of it. Other platforms and navigations are much more complicated but creating a web page from a template was easy to follow and fast to learn. Using both the possibilities and limitations I created an interactive guide for the viewer.

When guiding the viewer through the comic, I wanted to keep things simple because I have a lot of small details in each panel. So, I had it laid out where the viewer can read it from the American standard of left to right and scrolling down. This is why I expect the reader will interact with my work by scrolling down and clicking on the link to that leads the viewer to the seconded part of my comic. The same goes for when they are viewing it on other devices. 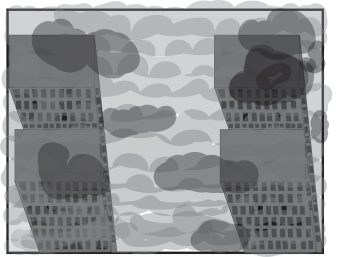 City Comic for negative perspective by Grace Kannberg, December 5, 2019. (Image edited on website to cut out the extra elements that are outside the black frame in the panel)

I have set it up so that when someone is viewing my comic on their phone, instead of the panels being lined up next to each other, they are in one row. I found that this way makes it so that they aren’t having to move their thump all over their screen just to read my comic. This deliberate sequence of each panel, both on the web version and the phone version, was set up to meet the expectations that I learned in Scott MacCloud’s Understanding comics. I think that if Scott MacCloud were to read my comic, he would appreciate how I used his definition of Comics to create a story that produces an authentic response in the viewer showing them that they can either look at the world from a negative or positive viewpoint. I also think he would like how I used scene-to-scene transitions to tell my story that looks at a city as a whole. Overall, I learned a lot from reading Understanding Comics and how to apply this to my comics to make them great.

Park Comic for positive perspective by Grace Kannberg, December 5, 2019. (Image edited on website to cut out the extra elements that are outside the black frame in the panel)

When putting my comic on Wix, I used the jpeg format because I found it to be the easiest and clearest to view on the website. When uploading it to the website through a media drop, it was easy for me to place it where I wanted to in my template.

Throughout this project, I learned a lot more about Illustrator and how to make a website. Though watching more tutorials on illustrator, I learned how to take text to the next level and rotate, reflect, and shear artwork. I also learned how to use different tools and layers more efficiently by exploring more with them when creating this comic. Everything I learned about making the website was new to me. From what format to use when uploading a comic panel to how to select colors for different aspects of the background of the website. I feel that I now have the confidence to create a professional website.