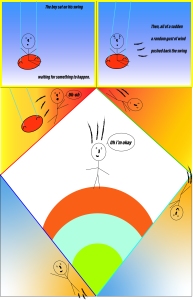 For my poster comic, I wanted to show the passage of time by drawing a character on a swing and his actions when a gust of wind moves him off the swing. I showed this as a timeline due to the action panels showing that he is in a continuous motion of movement. The way that I challenge me reader in how my comic is read is in how I made one large image in the middle of the comic and put the scene transitions on the outer edges of the comic. I also utilized the gutters of my comic in how the movement of my character can help the reader know where to look next.

The way that I show closure in my comic is in the way that I combine words and images in my last frame in the middle of the comic. My character tells the reader that he is ok after falling out of the swing and is firmly planted on the ground. I use words in the beginning as a narrating voice and as well as my character using his own words in the comic. These linguistic modes of information help the reader to understand why my character fell out of his swing, as well as to give a sense of closure to the comic at the end. My comic shows the passage of time in the sense of the entire comic showing an action sequence and the character reacting to it as a normal person would. The use of my frames shows the passing of time because of how my character is moving in a natural and flowing way.

This was my first time using illustrator. So for me, everything was new to me. However, I did find illustrator more interesting to use rather than photoshop. My style of iconography used was the use of the essentials and I kept most of my artwork minimal. This was done because I have always enjoyed comics that keep their artwork simple so that the reader/viewer has an easier time when they are interpreting the comic. I don’t like the heavy use of lines in order to make a more detailed comic, I believe in that keeping artwork simple for comics it gives more control to the reader rather than the person who created the comic to tell the reader how to feel. I feel like illustrator give more tools to people that want to keep it simple rather than to make it more complex. For me, the most useful tool was the group tool. This made my life and experience easier when using illustrator due to me keeping my character consistent in how he looks as well as being able to move him around as a whole in one click.