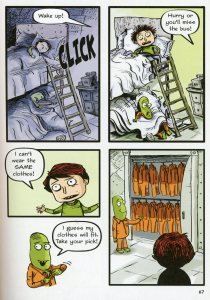 The graphic Novel I chose to read is called Earthling by Mark Fearing. It’s a science fiction novel about a boy who goes to school in outer space. This sequence on page 67 is an example of action to action closure as it walks through the process of the boy waking up. It goes from the room being dark to the light being on and someone yelling at the boy to wake up. It then shows him getting dressed for school. 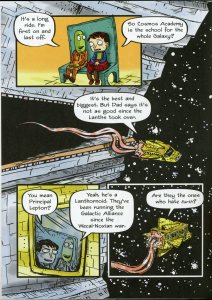 Page 67 from “Earthling” by Mark Fearing

Page 58 has 3 panels over a big background. The first panel shows the boy sitting down and talking to an alien. The image is very still and the frame is pretty wide showing time passage. It appears that their conversation lasts at least a few minutes. The sequence then moves toward the boy and the alien looking out the window to a far away view of the spaceship school bus flying through space. This sequence does a good job of letting the viewer know that a lot of time is passing.