The graphic novel that I chose for this blog post is They Called Us Enemy by Eisinger Scott Becker. The novel explains the story of George Takei, a well known actor of the Star Trek movies, and his and family’s experience in the Japanese internment camps. This is actually a book that I picked up from the store recently. I have always been interested in novels about historical events, so I thought a graphic novel about a historical event would be even more interesting. 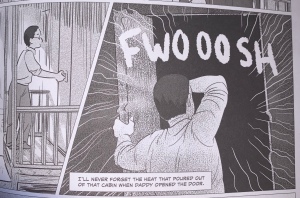 Page 63 of They Called Us Enemy

One example of closure (action to action) is on page 63 of They Called Us Enemy. In this scene, George Takei’s father went to go look for the barracks that his family was assigned to stay in during the camps. There are two different panels in this example. In the first one, Takei’s father goes to open the door of the barrack. In the second panel, Takei’s father opens the door and is met by an intense heat coming from inside. This is an action to action example because it features one subject (the dad) and is showing one complete action (opening the door). 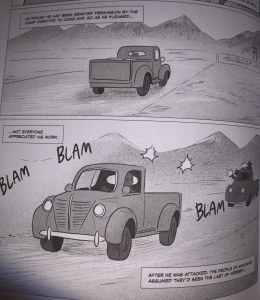 Page 146 of They Called Us Enemy

One example of time frames is on page 146 of They Called Us Enemy. In this example, Herbert, a missionary, is driving a truck in the first panel. In the next panel, he is being shot at from a car behind him. This is an example of time frames because the reader is led to wonder just how long he was driving for before getting attacked. When you look at the first panel, it looks like a relatively calm scene. It does not seem like he would get shot at in the next moment. One might wonder just how long the time frame was for this scene, and how long that car may have been following him.