Creating this comic for the web presented some new challenges that were quite challenging. The top challenge was dealing with the limitations the web possesses. This becomes very apparent when realizing that I had to change from attempting to learn and create a website through HTML and CSS to utilizing Wix as a platform for the comic. In the attempt to make an HTML website, I ambitiously strived to implement elements such as GIF’s and even have it be interactive in the way that McCloud’s comics were. I thought that that would be one of the best ways to fully use the capabilities, within reason, of HTML, but unfortunately, my actions could not keep up with aspiring ideas. Moving on to Wix, base elements of design are much easier to get a grasp on, but possibilities are also taken away. Making most of what I could, I arranged my comic in such a way where it is read top to bottom, having the reader go from right to left to view panel after panel. Although it has a linear design, I intended it to have it read downwards rather than simply keeping it in a tight area where every panel can be seen or having the panels be viewed by horizontally scrolling. This is because, for most platforms, using a finger to scroll down a screen or a mouse wheel seems much more convenient and intuitive than pushing the screen right or left. With this type of layout, I would expect McCloud to have a relatively positive reaction or at least I would hope so. This comic is slightly similar to that of some of his other comics such as the ones where he details the use of new technology in creating comics. Each has a fairly linear flow that has some sort of guidance, his arrows, and my texts, to guide the audience down the screen. 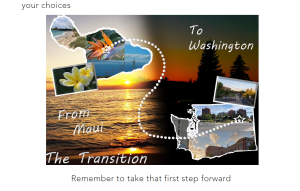 As far as actually constructing this webcomic, I mostly utilized Illustrator for the majority of the panels with one panel being made in photoshop. I had originally planned to work the opposite with photoshop being the priority and illustrator being the secondary source of artwork. However, actually getting into the thick of the project made me realize that I lack a lot of the resources I needed to make the comic fully in photoshop, so I turned to Illustrator where I could create objects, figures, and other elements from scratch. Going through the comic, there is a prominent difference from one slide to the rest and that would be because that one panel was created in photoshop. It was the only panel that I had enough pictures to create while also fitting into the type of story line I had in mind. In making both this and the other panels, I really had to think creatively to put all the elements together, especially when considering its implementation into a website format where these files become JPGs rather than the easily alterable files in their respective platforms. As I previously mentioned, I originally intended to use the HTML route, but it proved a bit complicated for my current skill set. With Wix, it just involved literally dropping them into the website creator and orienting them in the way that I preferred, although with some restrictions. The whole transferring into web format was made a lot simpler, taking away some of the stress of figuring out the intricacies of placement with HTML.