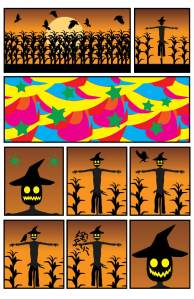 The creative process that I took when I made this comic was to sketch it out first and then make the images in illustrator. I saw that the date that the project was due was Halloween so I wanted to do something that was Halloween related. I first sketched out my comic and I knew that I wanted to include a frame in the comic that represented the gaining of sentience. There isn’t really anything that can visually represent sentience , so I had to figure out a way to do that. I decided to add make the layout somewhat normal to what a standard comic would have by reading left to right and then going down, but when they go down to the third panel of the comic that is what is representing the gaining of sentience. I chose to just make a crazy pattern with colors and stars and make the panel as the first two combined.  The long panel interrupts the aspect to aspect and it puts the span makes it hard to tell about time. Is the gaining of sentience something that happens in an instant or does it happen over a span of a couple minutes, hours or days? That was the representation I was going for when I made this. Something crazy that interrupts the flow of the comic and the flow of the scarecrow. The scarecrow is the one gaining sentience and I show that by having his eyes and mouth light up and the two stars that are the same as the previous panel. After the interruption it goes to an action to action where the crow comes to land, lands and then there is a cloud of feathers where the crow was into the scarecrow smiling. I am sort of hinting the closure of the scene because after the crow turns to feathers the scarecrow smiles. What happens to the crow between the two panels where it is there and where it is feathers is unknown, but whatever happened to it made the scarecrow smile.

This was my first time illustrating in illustrator, but this was not the first time that I had used vectors to sketch. I took an engineering class that used Solidworks and that used vector based graphics. But illustrator is still very different from that. The iconography that I used for this was the representation of sentience. I made a bunch of rectangles that were different colors and I warped them in a twirl and then I made a pattern with that. The thing that is very interesting is that this is wacky and psychedelic and random. The randomness of this represents a very strange thing that happened such as a scarecrow gaining sentience because it is very random, but interesting. I thought that using the patterns from illustrator helped make the iconography very random just like something gaining sentience. I used the clipping mask for each and every panel which was very nice. I was able to take the image and manipulate it so it could still be seen from the same background to add some consistency with the scarecrow’s background and the crow as well. I also created my own brush for the feathers and the pen tool for all of the sketches that I had to make. I also really like the gradient background with the sun going down in the background along with the colors, it is very visually appealing.