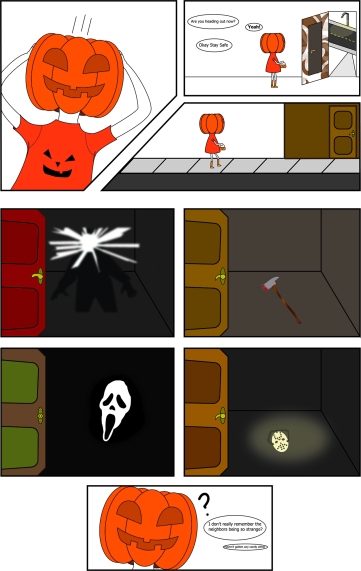 When it came to the creative plan for my comic I started with making a layout and then trying to think of what I wanted to put in it. I didn’t want all my panels to be squares so I started with angled panels that fit together which went through multiple variations. To challenge the direction of how readers read panels fit into this as well, the first three panels reading direction is left to up right then down. The slanted panels have the space in between adjusted to be wider that the top panel to nudge readers towards that desired reading direction, after that however the next four panels can be read in any direction. Clockwise or counter clockwise the reader will read each of those 4 panels in any direction they want before moving down to the panel at the very bottom that is centered. Closure from each one of my panels is mostly subject to subject and scene to scene. The first three panels are subject to subject as the reader needs to read between the lines to find meaning while the scenes staying in a scene or idea. Scene to scene applies to the four panels that can be read in any order as they travel an unknown amount of time and distance. I used linguistic mode to establish a small amount of dialogue, and to infer to the setting and time without actually straight up telling the reader. Under Scott McCloud’s definitions the dialogue is mostly picture specific or additive, as I believe the reader can figure out whats going on without the dialogue, the dialogue is merely “soundtrack” or helping. This was my first time using illustrator in somewhere between 4 and 5 years. I used illustrator for the first time in a web design class in my freshman high school year. I never mastered the program and barely learned basic tools. This time around I learned more tools, and more quickly with the better understanding built on digital tools in general and on past knowledge like already understanding what vector graphics are. For Iconography I used pumpkins, nighttime, and going door to door to let the reader understand it’s Halloween without actually saying that it is Halloween. I also used a bunch of references to Horror movies in each of the 4 any-direction panels, that could be viewed as icons of there referenced movies. Clipping masks were helpful for some panels and layers and grouping were great for specifying what I wanted to move and use. I also used some effects to get things like lighting and the like looking better. I just wish I had better art skills in general so I could do perspective more properly.