I struggled a lot to figure out what I wanted to do for this project, and I really didn’t know what I was going to do until I sat down and started working on Illustrator. I started off with the idea that I was going to do a comic recipe for something I ate the night before. This happened to be cereal with bananas in it which I believe is the best midnight snack, because I’m a firm believer that cereal is a better dessert than breakfast food. While working on it I realize that just making the recipe wasn’t going to be enough because it was really simple, so I decided to cut my project into two parts. The top side of my project would be a recipe and the bottom would be a scene of me eating it in my bed, which is where I usually eat it.

I believe my comic challenges the normal left-to-right reading experience because my project kind of works as a normal comic strip on the top half, and then just an image on the bottom half, but all together it really just makes a two panel comic strip page. I think my comic guides the viewer through the comic by having a very simple layout that is very clear to follow, and the use of repetition within the objects and the placements of these objects. The use of repetition also helps me achieve what I believe is moment-to-moment closure, because it shows a change of what is happening and also a progression in the recipe. The linguistic mode I used in my project I believe is additive because it gives a purpose to my images, which is stating my opinion that this meal is the “best midnight snack”.

I used Illustrator last year for a project, I didn’t really learn anything new in a technical aspect, but last year I used illustrator for the sole purpose to create logos, and this project forced me to learn how to use illustrator to say something, and create a story in a sense. The type of iconography I used in my project is something very simple and what I tried to go for is almost comforting because of its simplicity. This fit with what my project was trying to show, but Illustrator definitely had an effect on this, mainly because of my lack of experience and comfort on Illustrator. If I felt more comfortable with the program I might have tried to go for something different, but I did feel limited when it came to the creative aspect of this project, because for me Illustrator just seems very clean and perfect in a way, and that isn’t really my style. The tutorials helped me with how to create shapes and objects, how to mess with anchor points, using the gradient tool, grouping objects, and saving objects to my library. I used all this tools to mainly create my objects the way I wanted them to look, and also to keep my objects the exact same throughout the project. I don’t know if anything was necessarily confusing but my lack of experience and just not being very good with illustrator definitely made things difficult. 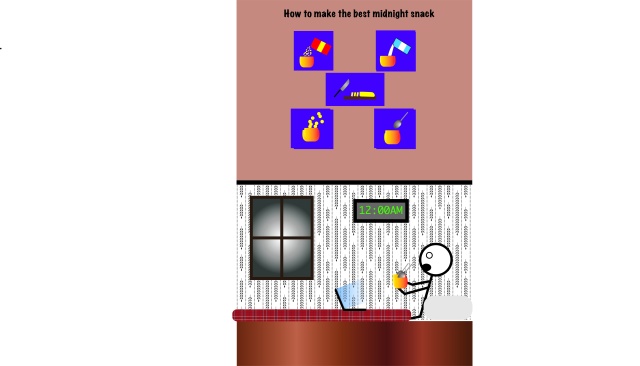