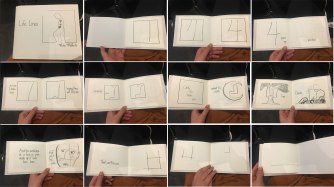 On our visit to the WSU Art Museum Collection Study Center on Tuesday, I read and analyzed a large variety of comics and I took many photos of them. However, this particular comic by Mita Mahato was the one that I kept thinking about after I left the museum and throughout the last couple of days.

For starters, I really appreciate how Scott McCloud stated that “today, comics is one of the very few forms of mass communication in which individual voices still have a chance to be heard” (Ch. 9/Pg.197). When I read Mahato’s comic, Life Lines, I could not help but feel as if a part of me understood Mahato in a way that I simply had not before. A part of her voice was heard by me and anyone else who may have come across Life Lines.

McCloud explains that “some forms of closure are deliberate invitations of storytellers to produce suspense or to challenge audiences” (Ch.3/Pg.63). On the very first page/spread of Life Lines, there is a single vertical line in a box. As a reader, I saw the simplicity of this spread and I immediately grew curious. What did this line represent? What was the significance behind it? The line was challenging me.

On the second spread, the number 4 was revealed. On the third spread, the message suddenly becomes duo-specific and additive. The words on the page and the number 4 combined sends the same message together, however, I could also argue that the words amplify and elaborate on the number 4. Four years ago someone died.

Throughout the next six spreads, the imagery and words lean more towards an additive combination. The drawings help the reader to see how important the role of a line can play and the words explain the internal conflict the narrator of this comic is facing.

In the last two spreads, another deliberate invitation is drawn out for the readers. There are no words; just lines. With the very last line being a horizontal line, closure is produced again because the visuals of the comic came full circle, starting with a vertical like and ending with horizontal.

My name is Ana María Alaniz Mendoza. Currently, Washington State University is where I'm working towards a double major in advertising and digital technology/culture.
View all posts by Ana Maria →
This entry was posted in Uncategorized. Bookmark the permalink.