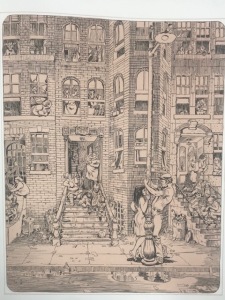 Family By Will Eisner

In the picture show, I definitely believe that it conveys emotion to a reader in many ways. From the graphics and even what is shown in the graphic helps provide those emotional implications. This piece was made from the artist Will Eisner who has other drawings that appear to have the same type of style. In them specifically, we see illustration based around life in a city. For the graphic I chose, it is called “Family” and includes an image that shows a couple outside their apartments flirting with each other while in the background, you may see families gathered on steps hanging out. You may even see people inside their homes if you look closer. I think it is important to address the setting of this image. Especially, since it is what keeps the story the image is trying to tell unique. A viewer can recognize that the time setting for this illustration may date back in the past sometime. We can determine that from the characters clothing. Also, we can see that in the background, the area looks more run down which shows us that this image is portraying people in some kind of impoverishment due to their characters clothing and the actions that are being portrayed. I could be totally wrong about this image. I think if we take a step back, we can see that this image could have been what it is like living in the city. If anything, we could say that these families and people shown live in a low-income area, but what keeps them together is the amount of interaction they have with each other. It is interesting that I could get all of these ideas from the illustration the author made due to the obvious emotions that were portrayed. This is apparent throughout the whole graphic. 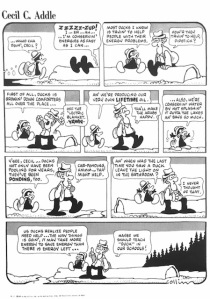 The next piece I want to address is called Cecil C. Addle, by the artist Ray Collins, who shows a great example an interdependent word/picture combo. This is sort of a comedic comic where we see a conversation between a duck dressed up in human clothing and an older man both having a conversation with each other. Normally, we would not see that happening in real life. In this case, it is what makes this comic it’s own piece. In the image, we see that this duck wakes the old man up and has a conversation with him about energy problems. Of course, this piece has to have some kind of irony to it. Especially, within the text that is being shared. I would say that this comic is interdependent, because without the words, this comic would be a silly graphic comic about a man and a duck, that is it. There would be no context. With the words, we are able to see that there is a reason for both characters and their interaction. That works the same way with the words. If there was no images attached, I think viewers wouldn’t quite understand the concept the author is trying to give off.