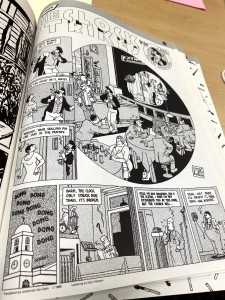 In chapter 5 of Scotts McCloud book he gives some  examples of how the artist conveys” the invisible realm of sense of emotions” by using lines that can be seen by the viewer as loud, rank, cold, quiet, sour, warm and also explains how it can show anger, joy, serenity, tension, intimacy, madness, pride and anxiety. During my class on Tuesday we visited MASC  where we were able to see examples of different comic books and i took a picture of some that were interesting, one of them illustrates duo specific where both words and pictures send essentially the same message. One of the pictures show the clock tower strikes more times than required and we can see the guys communicating through the phone, the line quality has immediate effect on the viewer since it warm as explained in the book. 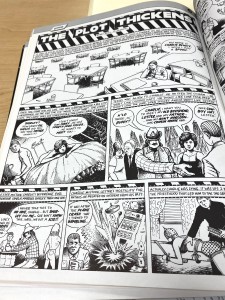 RAW By Art Spiegelman And Francoise

The other picture that i found interesting has more to do with being intermediate where Scott McCloud gives the definition where words and pictures go hand in hand to convey an idea that neither could convey alone. With this example of comic that i viewed in MASC i realized it can convey many different things including the line quality which is loud and some intimacy. We can also see the lines behind the picture and on one part we see one guy stretching his hand to say hello while the other guy complements his cow boy hat. With this it kind of we are not sure of how nice the hat is unless the two guys are just commenting on how it looks to him. It is soo interesting how this comic inter-plates the conversation between the characters in some way we can identify not much is said on these part since the actions portray the message they are conveying to the audience.