The comic that I choose to focus on in the Manuscripts, Archives, and Special Collections was the comic “Crash.” I found this comic inside a collection of comics that one of the staff members at the Manuscripts, Archives, and Special Collections choose to lay out for the class. I liked how this story is only four pages long. That being said the story gets to the point very quickly. I also really enjoyed the art style featured in this comic. It feels very chaotic yet at the same time structured. I think this has to do with where each item is placed amongst each other.

This comic is called “Crash” it came from a collection of comics.

I personally am a firm believer that a line can express emotion, and I think all comics are great examples of this. Out of the comic “Crash” I choose the first page to represent this. I think this picture does the best job of describing emotion. When I look at this photo I immediately think of “Chaos.” I think the fact that buildings and other objects traditionally thought as of square are curved in this comic give it a chaotic feeling. Paired with the fact that everything looks very close together makes the  picture feel very claustrophobic. I think the author intentionally did this because it sets the mood for a car crash. 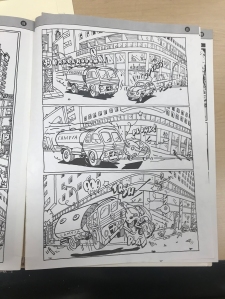 This comic is called “Crash” it came from a collection of comics.

This is the second photo from the comic book “Crash,” and I believe it perfectly represents the word/photo combination “Picture Specific.” As you can see in the photo the words serve no purpose other than to add sound to the photos. The words are really secondary and it seems like the photos themselves could have just stood alone.