The graphic novel that I chose to analyze is from a series, written originally by Akira Toriyama and the manga interpretation by Toyotaro, entitled “Dragon Ball Super.” This book is comprised of both heavy dialogue scenes and quick action sequences that stick to the more Japanese style of comics. As previously mentioned, both in lecture and “Understanding Comic,” this manga is read in the eastern style of literature, going from right to left rather than the opposite. 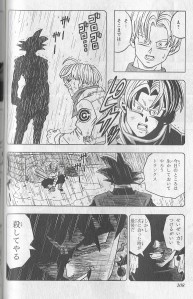 One example of closure from this manga comes from a set of six panels on a page with each transitioning using some of the crafts of closure. Beginning from the top right, the character in that panel has a flashback to events that took place years before the present. To signal this transition of scene-to-scene, the shape of the panels shifts from a standard square to one with more rounded edges and much more contrasting tones within. From there the closure between that panel and the one to the left is a much smaller area and also has Japanese characters, acting as sound effects, that span across both of them. The amount of interpretation needed decreases in retrospect of the past panels. Thus this transition becomes a more subject-to-subject change as it takes place within the same scene moving the focus from just that character to that of him and a highly emphasized shadow figure. Moving down, it seems that change between panels may be action-to-action. From a different point of view, the back of the shadow figure, it can be seen that the longer-haired character has gone from sitting up, clenching his fist at the figure, and ready for a fight to slouching over against some trash as he holds his arm in pain. Although it is not a whole lot of action, there is some there. From here on till the end, it seems that the closure establishes a more moment-to-moment transition. These panels are comprised of more dialogue as the view of the shadow figure closes in on his ominous face. 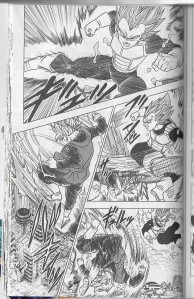 throughout the book. This one in particular, although it may not seem like it, needs the audience’s participation in making a more fast-paced action sequence. In these 4 panels, it is clear that each of them is trying to kick each other, but one misses and others manage to hit. Along with the slanted shape of each panel, depicting action rather than dialogue-heavy scenes, the author illustrates their motion, and in turn time, by creating streaks and blurs in the shape of their executed or intended motion. This can be seen especially in the bottom three panels as one of the characters dodges a kick, and by showing his motion through streaks in a circular path, fluidly flips and kicks the other character into the distance. By connecting all those motions with those streaks, the speed of that action can come to fruition, with large of the reader’s imagination fueling everything. Also as the final panel on the left bleeds into the side of the page, it further pushes that emphasis of all of this action occurring within mere moments despite being seen in four still images.