An example of subject-to-subject frames from the first volume of Library Wars: Love and War by Kiiro Yumi

At first, I thought this was an example of scene-to-scene, but since the frames don’t change by a significant distance or time that was not accurate. This is actually an example of subject-to-subject change because even though the location changes slightly, both frames remain the same general area. The first frame shows the characters outside of a building and in the next frame, they are inside that building. Another subject-to-subject change occurs when moving to the small frame that shows a keypad within the room they entered. All three frames remain in the same idea that the two characters are visiting the library making them an example of subject-to-subject. I chose this comic because it is a manga and I thought there might be a higher chance of finding aspect-to-aspect since Scott McCloud explained aspect-to-aspect was more often found in Eastern comics. However, it seems the author did not use aspect-to-aspect in this manga. 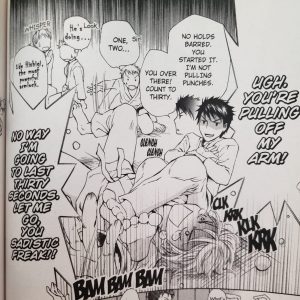 An example of time and motion in a frame from the first volume of Library Wars: Love and War by Kiiro Yumi

There were not any extremely unique examples of time frames in this manga so I just picked a frame where I thought there was a more complex use of time versus the other frames in the book. This frame lasts at least several seconds. The first, the most obvious use of time in this frame the black-haired character’s head which is drawn twice, once looking at the girl he fought and the second looking at the men in the room. Drawing his head twice in that way gives the impression of motion where the character is looking back and forth from the girl and the other men. That on its own adds at least a few seconds of length to the frame. The other example of time I wanted to focus on in this frame is the guy that is supposed to be counting to thirty. The speech bubble clearly shows him at least counting to two which adds about two seconds to the scene, however, the ellipse gives the impression that he continues counting mostly likely to thirty. That makes it fair to infer that this scene lasted at least around thirty seconds.