When choosing what graphic novel to use for this project, I was a bit lost. I have never read a graphic novel before and I didn’t know what I would like to read. After looking around I decided to go with Beautiful Creatures: The Monga because I have been wanting to read the book for a long time but just haven’t had the time to do so. This way I will be able to compare the two types of books with each other. Moreover, the book aesthetics were pleasing to me because of the Japanese drawing style that was used to tell a story that takes place in a small southern town. 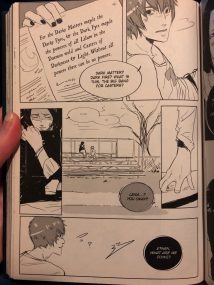 One interesting example of closure comes from Chapter 5 (there are no page numbers). This page is showing Aspect-to-Aspect. Aspect-to-Aspect gives a better idea for what the mood, place, or idea for the scene is about by giving the viewer extra information. From this page we see two characters sitting on bleachers talking. In the two frames surrounding this, we see how the characters response to each other. The girl is holding a book close to her chest and the boy’s knuckles are clenched on a bench. From this, the viewer gets a tense mood from their calm setting. I was not surprised to find this in the book because of the Japanese style it is in. Aspect-to-Aspect is mostly used in these regions compared to the West.

Two interesting examples of time frames that ask for serious viewer participation or interpretation are from Chapter 5. The first one asks the viewer to look at events as it accurses seemingly at the same time. A girl stands in the middle, as everything is going on around her.

The DJ playing music, lights breaking, sprinklers going off all around her, people screaming. Each action bleeds off the page to leave it up to the viewer to interpret how intense and chaotic this moment is.

Another example that shows time is when the two love interest get closer together with the direct passing of dates. We know that time is passing by from this direct approach, where reader participation and interpretation comes into play is how the two characters have become closer. We, as viewers, fill in the days of there relationship through the gaps that we are given and how they are depicted from date to date.