For my Graphic Novel, I chose to read V For Vendetta, written by Alan Moore and illustrated by David Lloyd (with additional art by Tony Weare). I chose this novel because I have actually seen the movie and I thoroughly enjoyed it. It’s a story about a dystopian, totalitarian future in Great Britain with a man who has an agenda involving an anarchic government . I am very intrigued by strange stories like this, and am excited to read the story in a print graphic novel.

One example of how Moore uses Closure in the novel is in this 3 panel sequence. In the first panel, an explosion is shown around some building and/or statue. As you look to the next panel, you see another view of the fire. Finally in the last panel, you see the main character, V who says something kind of strange and too positive for the context of the other two panels. Looking at these three panels in a row, you can use your imagination to put together that this character V is behind the reason for the explosion. He also has a smile on his face which shows he is happy about what has happened. This sequence makes the viewer interact with it because, from these three panels alone, you really don’t know how the explosion happens or what the setting is, so it creates a lot of imagination in the viewers mind of what might be happening in the gutters. This could be considered an ‘aspect-to-aspect’ sequence, as it goes from a panel of the fire to the next, showing the (most likely) cause of the fire. 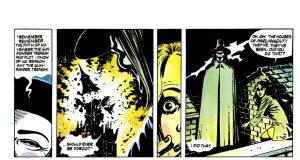 Moore manipulates time in this sequence by contrasting long dialogue with a skinny, ‘fast,’ image. V begins a lengthy monologue in the first panel, which requires the reader to spend a lot of time on this panel. The monologue is paired with a glimpse of V allowing the reader to visualize him giving the speech, showing the sense that quite a bit of time has elapsed before they move onto the next panel. The second panel takes much less time to read and is also juxtaposed with a snapshot of an event that would happen in an instant, which signals to the reader that only a few seconds have passed over the course of this panel.