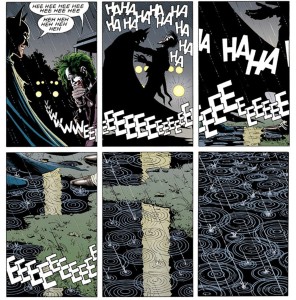 A page from “The Killing Joke” where batman and the joker share an uncanny laugh at the end of the novel.
(Alan Moore, Brian Bolland, Richard Starkings, Tim Sale, Batman : the killing joke, 2008, pg 49)

When thinking about closure and time frames, “The Killing Joke” offers and portrays many excellent instances of these techniques. “The Killing Joke” is an iconic graphic novel and one of its most notable scenes is the final page. As Batman and the Joker come face to face in the final moments of their seemingly perpetual struggle, a dejected and forlorn Joker tells Batman to perform the typical and redundant heroic ending; however, Batman wanting to cease the senseless fighting tries to help the Joker. Beyond from help, the Joker conveys it in a joke where Batman laughs along–completely out of character– leaving the viewer to decipher the last scene. This is a superb use of closure because we are left wondering what happened, whether the Joker was killed or if the cycle will repeat again.

A section of “The Killing Joke” where the Joker finds a venue for his deeds as he then reminisces his former life.
(Alan Moore, Brian Bolland, Richard Starkings, Tim Sale, Batman : the killing joke, 2008, pgs 9-10)

Transitioning to time frames and the prevalence of them in this comic, the authors interject memories throughout the story to provide depth and according to Scott McCloud’s explanation, to divert the linear progression of the story. In the pages I chose, the Joker is curating a venue for his dubious plot, but the page after portrays black and white  panels and who we are inclined to believe is the Joker in his former days as a normal man. This transition provides depth into the story by suggesting an event(s) in his past that led him to become deranged and psychotic. With this, the Joker as we know it is not just a simple villain but a man with aspirations, compelled into crime by desperation. In addition, how the Joker is popping out of the borders and how the other panels are arranged, it brings emphasis to his character with a close up shot interfering with the edges of the other panels.