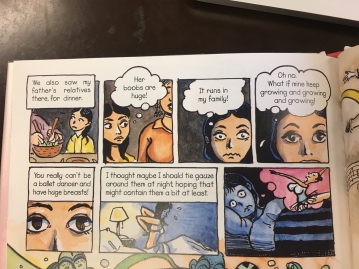 This photo was taken by Ana Maria and it is a page from the book, To Dance: A Ballerina’s Graphic Novel written by Siena Cherson Siegel and Illustrated by Mark Siegel.

Closure – This page does a fantastic job capturing different thoughts, emotions, and time frames from scene to scene. As a reader, I am able to follow along with the visuals and the linguistics seamlessly. In fact, each panel is laid out from left to right and is aligned with the one next to it with illustrations that stay inside of the panel lines so I don’t even have to read the words in order to gain an idea of what the particular comic strip is about. A part of the reason I chose this page, however, is also because I find this storyline so relatable. When I was younger, I was paranoid about the same thing! I would think about ways to prevent my boobs from being huge like all my grandmas, my aunts, and my mom. This would most commonly happen during family visits, at night, or when I was at sports practices just like in the book. 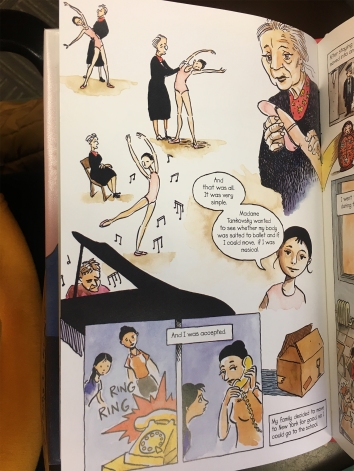 This photo was taken by Ana Maria and it is a page from the book, To Dance: A Ballerina’s Graphic Novel written by Siena Cherson Siegel and Illustrated by Mark Siegel.

Participation & Interpretation –
This page consists of three different major parts of the story. The top part illustrates several repetitive illustrations that allow the viewer to gain a sense of movement, but the viewer also must understand that the same dancer and instructor are being used over and over again. There are two characters in five scenes,  not ten different characters in a single scene. There are no panels used in the first part either, but there is a sense of direction from top to bottom and left to right.

The second part of the story on this page includes two closed panels that show how the dancer’s callback took place for a dance school.

The third part of the story takes up the least amount of space in the bottom right-hand corner of the page. The image is not in a panel, but the background is the whitest space on the page. The graphic is just a box and a closed text box below the graphic explains that the dancer’s family is moving to New York for dance school.

My name is Ana María Alaniz Mendoza. Currently, Washington State University is where I'm working towards a double major in advertising and digital technology/culture.
View all posts by Ana Maria →
This entry was posted in Fall 2019 Archive (201 Blog), Uncategorized. Bookmark the permalink.