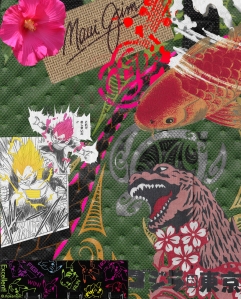 With this project, I sought to combine elements of my home and heritage/culture, specifically Hawaii and Japanese culture. The objects from Hawaii are situated more towards the top half of the collage, excluding the background which is a design from a lunch bag. These include things such as a Hibiscus flower, the logo from a local sunglasses company and a design from a T-shirt. Obviously for the sunglasses logo, Maui is stated right in the name, but as for the t-shirt logo, it is from a brand known as “MauiBuilt.” I would say that the majority of shirts that own are from that company and, overall, have that signature local type aesthetic to it. As for the Hibiscus, this is Hawaii’s state flower, however, this is the pink variant rather than the yellow. Then, in the background is the lunch bag with designs commonly seen in Hawaii and other Polynesian cultures. One last element on the top is the koi fish. Although not an uncommon sight to these fish in some areas of Maui, they are more closely associated with Japanese culture and thus I used it to represent the idea of myself in this comic. The koi fish seemingly enters from the right and, by creating a greater contrast with color in the design on the lunch bag, implies movement through that leading lines. That line leads to and goes past the Japanese elements on the bottom. These include images from a manga, a game holder, and a design from a Japanese noren (sign curtain). Each of these items were bought in Japan, over the few years I was lucky enough to travel there. As the koi fish travels along that fuchsia colored path, holding those strong ties to Maui close, it picks up those items of Japanese entertainment culture and continues along that path. In other words, symbol of the fish represents me traveling along my path maintaining strong links back to home while also embracing and picking up elements of Japanese culture. Juxtaposing these elements in a way where it lines up with Lovett’s ideas of harmony and unity were key. Many of the items possess a warmer hue which was intended to contrast the darker greens in the background. Also, looking at it with a diagonal split, I attempted to balance out the upper right portion of close proximity items with very saturated colors with the bottom left portion that has less color to it, but has the white to balance out the weight of the whole design.

Although this was not my first time in Photoshop, I had not used it for a long time so it did take some time to get used to things again. Many of the early tutorials were good refreshers and as it got into the later ones, I learned a lot of valuable tools that helped a lot, especially in this project. Once such tool was the adjustment layer and using that with a selection to get a specific portion of an image. I had not realized I could use this tool until halfway into making the collage comic so some images were just selections that were copied and put onto another layer.  Another helpful tool was clipping masks. Theses especially helped with altering specific portions of images that I already cropped using a layer mask, but still had certain details that did not need to be altered. Overall, it was a good experience in using and learning some intricates of Photoshop, although I do wish that some functions were a little more simpler to carry out, such as completing more complicated selections that require a good amount of precise detail.