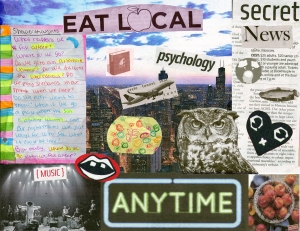 This collage fits into Scott McClouds definition of comics because I tried to make it kind of aesthetically pleasing to the eye with the pops of color and the colorful backround. When it came to the readings of Design, I was influenced by some lines, shapes, textures, and colors. I tried to make the backround wrikinly so it had more texture, I also tried to make the “poem” with lots of texture to add to the flatness of the other images. I also used shapes when it came to this collage. I made some of the cutouts like the fish and the lips more circular to add more to the image. I added a lot of color to this collage, like in the peom and in the “eat local” tittle. I wanted more pops of color to attract the eye. I also used balance, since I have a lot on the left with the note, I added a bunch of little images to balance out the image as a whole. When it came to the words on the collage, I added “secret” and “news” together to add some sort of mystery. Why does it say that? What are the secret news?

This was not my first time using photoshop, I used it one time for my COM 210 class. I learned a lot of new things in this project, I learned how to adjust lightning in my image using the magic tool. I also learned how to do layer masks. For my collage, the most useful tools I used were the magnetic lasso and the optical lasso. I used that tool a lot to cut out my images. The brightness and contrast panels were very usefull as well, I used that to brighten up the skyline so the images I put on top would pop more. Over all, I really liked making this project, it was a lot of fun to make a collage and just have fun with the program.