The biggest concept from Understanding Comics that inspired my comic was closure. Closure was the most interesting concept from the book to me, since it’s such a complex topic. Closure is present in every form of media we consume, and good media producers know exactly how to manipulate it and use it to grab the viewer’s attention. 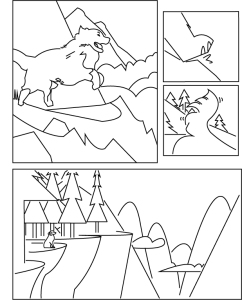 If the consumers of media knew everything about the media to begin with, there would be no suspense, no conflict, no interest, and above everything else no personal interpretation. The consumer’s expectation, and subversion of expectation is such an important part of keeping the consumer’s interest piqued. Closure is a storytelling tool that is a constant push and pull of how much the consumer expects, how much they know, and how much they want to know. Giving the consumer too much or too little is really easy to do, and finding the perfect balance can make the difference between good media and bad media.

In my comic, I tried to leave the comic mostly up to interpretation. I didn’t want to explicitly tell the readers what the comic means, or throw my own personal meaning onto it. That’s actually what I love especially about music; my favorite songs don’t explicitly tell a specific story, but they deal with concepts that I can relate to in my daily life in an indirect way. I think that’s the case with popular songs too, people like songs they can relate to. My own personal meaning the comic originated from was just a starting point.

In retrospect, I definitely could’ve made the message clearer. I wanted people to be able to paint their own meaning onto my comic, but I think some people were just confused by it and wished there was text. Overall though, I’m happy with how it turned out and I learned a lot about seeing my own work from other people’s perspectives.