Posted on November 1, 2018 by briannabrainbuzz

I believe that comics have the power to take a story and synthesis all that is is trying to say into a few panels. It combines some of the best elements of both reading and visual art. Comics turn a reader into a viewer, someone trying to form meaning out of an image. It is with this and Scott McCloud’s definition of comics that makes me feel that my piece is a comic. My piece works with the reader in disrupting the normal pattern the human eye follows when reading. 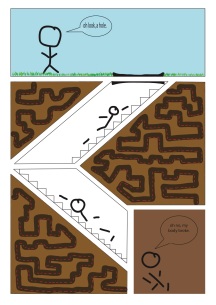 The White Hole. An original comic by Brianna Esqueda.

For me, one of the larges things I took away from Understanding Comics that I implemented in my work was the idea of movement. McCloud talks a lot about movement and how a character enters a panel. that was the main focus of my comic, having my subject fall down a hole. This was actually a main reason I chose to create a comic in the from of print media. Had my comic appeared on a screen that required scrolling, there would be a pause destroying the smoothness of how the eye moves down the page.

I would imaging that my comic would best be read in a book or magazine. i think that comics are best enjoyed when you are holding them. it makes the reader/viewer more aware of the fact that they are holding a piece of art.

I hope that when someone reads my comic they are initially confused. I want them to have to take a minute to figure out what happened.Then, once they do, the smirk to  themselves. Maybe they find it funny or a bit ironic. Ultimately, I just hope that people enjoy it for the moment that they are looking at it. Or that they have as much fun looking at it as Idid creating it.

This entry was posted in Fall 2018 Archive (201), Uncategorized. Bookmark the permalink.