Posted on November 1, 2018 by timmythuynh

I believe my comic fits Scott’s definition because all of the relevant images are in a position and next to each other in a deliberate way. When I first heard that we were making comics I decided I wanted to do something with dialogue and text but after reading the book and read the part on which text and image balancing were so important, I decided that I no longer wanted text in my comic because I wanted something that the anyone could see easily and without the need of explaining anything with text. Another thing was the fact that images that are slightly changed and next to each other can explain movement or a story. The first two images show someone going from a neutral position to kicking the can and that tells the reader that it is in fact deliberate for the kick and that it was premeditated rather than just showing the can being kicked. The last two images also do something similar in that it imitates a camera panning into the bin. With the isolation of the bin at first you can see that it is important to the story and explains the next image of the kid in the bin much better than just simply showing the kid in the bin which could confuse viewers. I decided that I would like this piece to be digital because of how short and simple it is and that the images could be split up for better story telling through animations or clicking. The comic in my opinion is to short for print and some of the details might be lost if it is too small. What I wanted people to see when they saw this comic was something a lot of people can relate to. Kids just running around and playing and having fun with each other. I remember when I was a kid I would go outside and play until it was way too dark. My friends and I would play any game that we thought was fun that day or just run around and pretend to be some kind of character. I wanted other that read this comic to be reminded of that innocence and that fun they had when they were young and that having fun with friends can be as simple as kicking a can and chasing after each other. 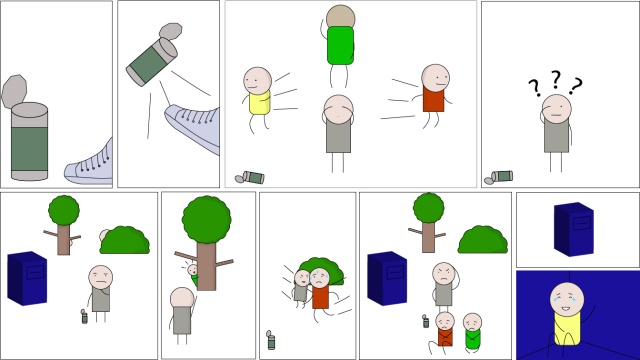 Comic by Timmy Huynh, October 2018. “Kick the Can” a comic about 4 kids playing the hide and go seek spin off called kick the can.