Hello friends! I hope that everyone is managing their work load okay with TWO WEEKS left in the semester. Remember to take breaks, drink some water and call a loved one or two.

For this week’s blog, I decided to continue with the nature theme in Oregon that I posted about last week, and do something related to a quarantine guide, because that’s all I seem to be writing about for The Daily Evergreen. So, without further ado, here is a breakdown of my “Show and Tell” comic.

Scott McCloud’s definition of interdependent word-picture combinations is as follows: “…where words and pictures go hand in hand to convey an idea that neither could do alone” (pg. 155). I believe my comic is an example of this because I chose to incorporate pictures from my personal life that have meaning to me. Other people who didn’t grow up in Oregon, or even in Eastern Oregon for that matter, might not have any idea what a mud pit is, or why it’s so gosh-darn fun to play in as a child. Other people might not have experienced fishing or farmland adventures like I have, so looking at these pictures out of context with no idea of where they were taken or who is in them doesn’t get the full effect across to my audience that I would hope. With these captions, however, I think (and hope) that it becomes more clear. Hence why my comic is interdependent – one cannot be without the other. 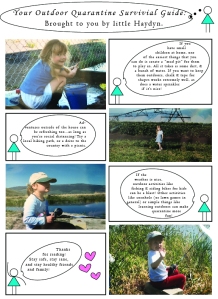 I also feel that I leaned more towards McCloud’s definition of “duo-specific” (“…in which both words and pictures send essentially the same message” (on pg. 153)) and “additive” (“…where words amplify or elaborate on an image or vice versa” (on pg. 154)). The pictures that I chose convey the suggestions I have in the “quarantine guide”, however, the words also elaborate on more than what is shown in the picture, falling under both categories of these definitions.

As with last week’s blog post, I chose to use the “insert shape” tool for my stick figure girl to represent myself, as well as for the speech bubbles. Twice I used the “pencil tool”, and that was for the arms of my girl at the end of the comic. (I LOVE THAT TOOL). The color panel was also incorporated, but this time for more solid, basic colors rather than multiple colors for different things like last week. This comic to me had a more aesthetic vibe – the colors are similar and the text, like a typewriter, pairs well with the timeline of when these pictures were taken (in the early 2000’s). By using these basic shapes, it gave the comic a more childish appeal, which was what I was going for with parents, and the pictures gave a sense of truth to what I had written. Overall, I was much more pleased with how this one turned out in regards to layout and color than I was with the previous one.

The only observations that I really have about these tools and how I created this comic digitally is that it’s been a lot harder than I thought learning new skills on software. I am not a techy person in general, but I think I finally am starting to get the hang of some of these skills that are no doubt important in the future.

This entry was posted in 201 Blog, Show and Tell. Bookmark the permalink.