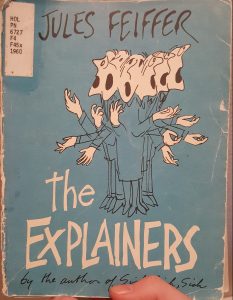 The book I chose for this assignment was The Explainers by Jules Feiffer. This is not a graphic novel, but a collection of comics. I know I was supposed to find a graphic novel. I intended to find one. When I was looking for one at the WSU library, every selection I could find in the database turned out to be unviable. So, I went and searched manually in the library in a section that appeared to be comics and graphic novels. By the time I finally found an interesting one, I had forgotten the nature of the assignment. By the time I realized this, a pandemic had broken out and I couldn’t get a replacement. I’m sure I had a chance to rectify this at some point, but was probably just too stupid or lazy or something to fix it. Apologies to the instructor. I will try to complete this blog.

The Explainers is a collection of comics, mostly expressions of philosophy, criticisms of certain ideas, and satirical portrayals of societal behavior. The art style is rough, black-and-white pencil sketches. There are no defined panels, the moments of each comic are all free-floating on the pages. Often, one comic will span multiple pages, with each page only containing one or two “panels”. The art style and presentation work to keep the focus of the text on the ideas presented, rather than the visuals used to convey those ideas. The moments where the reader is forced to flip through several pages reinforces the illusion of time passing, or brings the focus in to a particular moment or visual. The transitions within each comic are entirely action-to-action, each comic featuring only a small number of subjects, mostly just talking to each other or the reader. 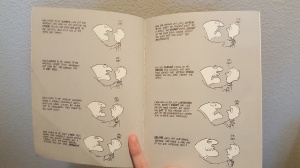 A comic from The Explainers

Though most of the experience of reading The Explainers is interpreting the written text, there is a certain measure of gesture, expression, and abstract effects on the text that enhance that experience. In the included example, the father’s text is bold in certain places, sometimes changing the implication of his speech. Additionally, his face grows in intensity over the comic, as if he grows more and more desperate to get his son to hear him, despite the fact that his son appears to be listening. All this to say: the art is expressive and wild without getting in the way of understanding the message, even if it isn’t always designed to be relevant to that message.

Overall, The Explainers is rich with messages and humor. It could be a bit dull at times – many comics were basically just walls of text – but I enjoyed it on the whole.

This entry was posted in 201 Blog, Graphic Novel Review. Bookmark the permalink.