The graphic novel that I chose to read for October was Bone: Out From Boneville By Jeff Smith. I chose to do this graphic novel because I really like how the characters look and the style as well. The story starts off with three white cartoonish, “bone” characters. One of the characters got kicked out of town because nobody liked him and the two other characters help him get out of town. Fone Bone is the main character and we follow him through most of the story. He gets separated from his friends after a locust swarm pushes him off a cliff and he is separated from his friends. He then finds a valley where he thinks his friends are and looks for them. He meets a bug named Ted who tells him about Thorn, who is a woman that might know where is friends are. As Fone Bone is looking for his friends he meets a dragon and this dragon follows him around and protects him from the rat creatures. The rat creatures and the dragon have some kind of agreement in the valley on territory or something and the rat creatures want to start a war. Fone Bone then meets Thorn, who is a beautiful woman that Fone falls in love with, and Thorn takes him to her home and takes care of him. We then see one of Fone’s friends Phoney Bone, who was the one who got kicked out of Boneville, and he meets Thorn’s Grandma in the valley and she takes him to Thorn and Fone and Phoney meet up. Phoney goes off by himself and finds a town where he meets up with the third character, Smiley Bone, who is working as a bartender in the town. Then, there is an attack on Thorn’s home from the rat creatures and the dragon saves them and Fone makes it to the town and meets up with Smiley and Phoney. 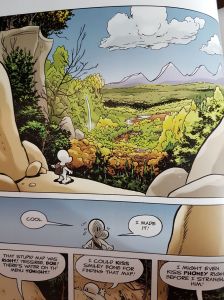 The iconography was very interesting to me. The main character is a sort of simple design being all white, compared to a different character, Thorn, who is drawn more realistically and with more detail. All of the backgrounds and creatures are drawn in great detail and are more in depth, while the three bone characters are all very simple and they stand out. Scott McCloud talks about how using a very detailed backgrounds with simple characters is something that comic books artists do and that is highlighted on this page here where Fone Bone discovers the valley.

I think when I looked at the web comics I found myself interacting a lot more with the comics, especially Scott McCloud’s web comic. One comic that I found particularly interesting was Somnivore. I found this comic interesting because there were multiple ways that the comic could be read. If you just read vertically down then you still get an interesting story and if you read left to right you also get a story and the stories make sense. The last panel in the comic should always be read because it makes the story, no matter how you read it make sense because it is connecting the previous panels to the dream. In this example I read it vertically from the center of the comic and the story makes sense when you read it in this way. I enjoyed that I could zoom in to see this specific example on the web page and ignore the other panels on the page. This connects to how Scott McCloud’s ideas on what assumptions the audience makes when they read a comic and how using web comics can create new and interesting ways to read comics.