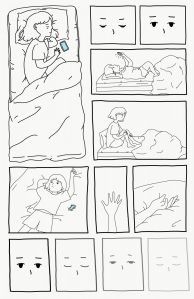 A comic about insomnia and the sweet embrace of slumber. Comic by Min Kim, November 2019

When creating my comic, I wondered how to create an interesting layout that challenged the typical top-to-bottom expectation. To achieve this, I set the background with a large borderless panel in which the comic was shaped around. In addition, it challenges the reader to alternate reading from left-to-right to a top-to-bottom sequence and back so that the reader must concentrate more on how the comic is read directionally. When thinking about closure, I ended the comic with my character slowly closing her eyes and although it can be expected that she fell asleep, it is not explicitly shown and can be left up to the reader to decided what happens after (if she is trying to sleep, just resting her eyes, and so on). Throughout my comic, I guide the viewer through the passage of time my comic describes. One can understand which panel comes next in my comic by seeing the obvious actions-to-action sequences, movement-to-movement, and scene-to-scene of which panel comes next. For instance, my comic begins with someone seemingly asleep, then as her eyes open (movement-to-movement) and still laying down, she looks at her phone but later is seen sitting up and feeling unhappy because she cannot sleep (scene-to-scene) or for any other reason the reader may interpret. This strategy is inventive because although certain actions and movements are explicitly shown, in the entirety of the comic, one does not know whether it happened in a matter of minutes of hours on end. It is up to the reader to interpret how much time has passed between the change in transitions.