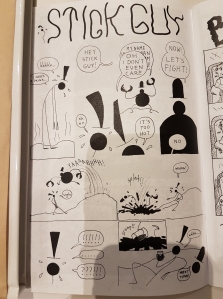 The comic that I decided to do was STICK GUY. I chose this particular comic because it did a lot of interesting things with a simple character. The simple character is only a stick figure with a top hat which is a very simple design, but I liked what the artist did with that simple design to make the comic more unique. First thing that I noticed was that the speech bubbles on the crab villain were being blocked out by the main character saying “oh I don’t even care” when it blocks out the rest of the villains speech bubble where he introduces himself. This simple design choice makes it seem like the main character doesn’t care about this villain who wants to fight so the reader shouldn’t care about him either. Another interesting thing is when the villain turns into goop after missing his jump there is a frame that there are three different speech bubbles. One is “!!!!!!!!” then, “…….” then, “???!!!”. I think that this is an interesting example of time because the author is showing that the character is first realizing what has happened, then thinks about it, then questions his decision as he comes up with the final conclusion. The main character finally gets water and the villain’s head says “next time” which makes me think that there will be more hi-jinx in the future between these two.