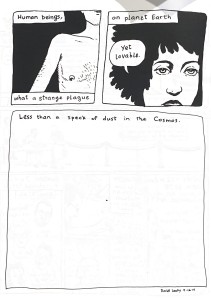 During my time at WSU Art Museum Collection Study Center, we got to look at the Northwest Alternative Comics exhibition from fall 2016. This collection consisted of comics at the poster size, as well as in zines. When reading through a variety of zines, I found that I really enjoyed the works of David Lasky. In his comic book “Manifesto Items 4” I looked at this page with 3 simple panels that really made me think and hear the authors voice. The Author of this comic is very straight forward about the three ways you can look at the human race. In his first view (panel 1) it reads, “Human beings, What a strange plague…on planet Earth.” This quote, paired with a drawing of a skinny arm and chest, as an additive combination of words and images, it brings to the views attention that human beings are weak yet plague the earth with our actions.

In the next panel, it continues to state, “Yet lovable.” This is the second view of human beings that the author describes. This quote is said by a person illustrated who is fairly abstracted to make the reader be able to connect with this panel more, based off of Scott McCloud’s abstracted universal cartoon theory. Also, because the reader of this comic is in fact a human, I think that this panel is the easiest to agree with, because we are impartial and want to be lovable.

The last panel states “Less than a spec of dust in the cosmos,” paired with a small dot in the center of an otherwise blank panel. This puts you into perspective of possibly the author saying that it doesn’t matter if you, as a human are a plague to the earth or if you are lovable, compared to the cosmos, it doesn’t really matter. The way in which the author uses only a small dot on the page as an illustration provided a unique sense of closure in this comic. Seeing only a ‘spec of dust” it makes the viewer think that it is zoomed out showing Earth from a distance. This transition between the second and third panel would be aspect to aspect because although they do connect and relate because of the human race, it leaves the imagination to the reader as to what they picture between the panels. This could be as simple as looking at the person on panel 2, then zooming all the way out until you only see a spec of dust, or the reader could imagine what might be going on earth, and what everyone is doing, whether they are being a plague, or are being good and lovable.

I chose this page because although it is very simple, there is a lot packed into it, and makes the reader really think about our world and what we might be affecting, or not affecting, depending on the which of the three views of the human race they see us as.