Hitched by Mita Mahato was able to show them self through their work. I was drawn to this zine in particularly because of how personable it seemed. On the back they wrote a thank you to the person that they had received the maps they used. This made it feel more realistic that these were real maps had used from the road trip. At first when I read it I thought it was just memories they had from their road trip and were using it in story form to remissness on it.  Then as the story went on it became more of a whimsical story with things flying through the air. I felt like the Photoshop technique used made it feel like it really was maps and memorabilia from their trip. This reflected their voice to me because they let me seen into their trip which is seemly important to them.

I also chose Scorched by Tom Von Deusen who was writing about a character named Tom. I found this one interesting because of the way that the character was portrayed. They seemed like a slob, were rude and over all made you not really want to root for them. I thought this was an interesting way to show who they are (maybe tried to include flaws), that was until there was another character introduced. In this zine a second character named Tom was introduced and ended up with the girl. I wondered if as an artist this could be literally Tom based on the names, but also create multiple characters to reflect the multiple sides of Tom Von Deusen. Or is it more simple than that and he only relates to one of the characters, or maybe none at all. 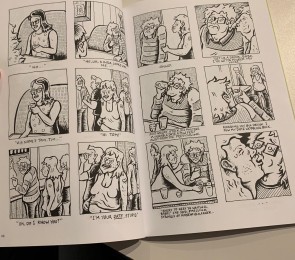