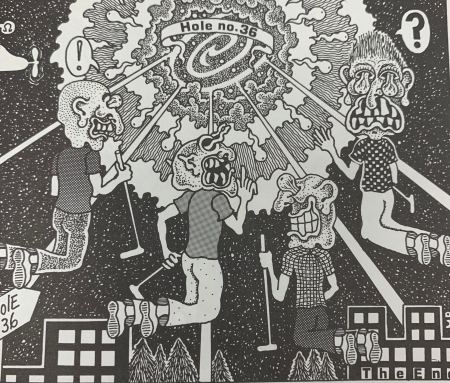 I chose this first image of Sacred Profane because of the way the words were correlating with the imagery. As readers we wouldn’t interpenetrate the man patting the kid on the head if the words were not there. As readers we could see that and think he was removing his hat, hitting him or maybe even blessing him. By having the words pat pat there made it very simple and easy for readers to know what was supposed to be happening. In the background of the same image you can see a car and the sounds the car is supposed to be making, this is helpful for readers because it helps them to know that the car is hectic scene. This is a good example of interdependence because the pat on the head would not translate the same without the imagery or words. The other image from Sacred Profane has a good example of how lines can represent movement. The lines were used to show wind gust, smoke, reflections and even light. Although it is just lines the way it translates into out brains is showing movement and textures. The third image I picked out is from Crazy Men Deluxe. I chose this image because of how literal it is. The comic referred to a “Hole no. 36” and the hole is literally labeled as hole number 36. So even though I would be able to infer that the hole they are going into is the one they’re talking about, but its dumb down even more and is labeled. This could be used as an example for duo specific since the words represent the same thing as the imagery, it could also be seen as an example of montage since the words are used as a part of the picture.