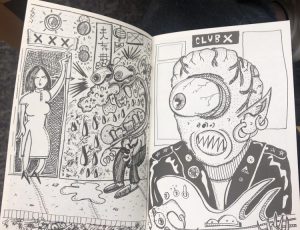 This comic shows a woman standing in front of a doorway with what looks like a half-monster half-man staring at her. I mainly focused on the left page but I thought it was interesting to see another monster looking at the characters on the other page, I thought it was meta in a way. The line quality on the left page is different between the two characters. The lines around the woman are minimal, clean, and organized. The combination of her stance and the line quality makes the woman seem bold, independent and put together. In contrast, the man/monster concoction to her left looks like something out of a completely different comic. The line quality for the man is a lot of hectic and random, there’s a lot of drips, scribbles, and harsh lines, it almost provokes a sense of fear. The artist also separated the two characters quite distinctly, it looks like if divided the page in half at the right-most part of the doorway, the two parts would not look like they’re related at all.

This page is from the Richie Rich Millions comic. I thought this page was a good example of a Duo-specific or additive combo. This comic page is about how Richie has too much money and is trying to figure out where to put all his money. If there was no text, I think that the reader might be able to get the general message out of the comic soley based on the images. I also think that the reader could get the same idea if there were no pictures, and just text, which is why I think this page is an example of a duo-specific combo. At the same time, I think the text adds a little bit more context to make it easier for the reader to understand the comic.