This week we went to the Manuscripts, Archives, and Special Collections (MASC), and we looked at all different types of comics. The first table that had books on them was very old and was one of the first books ever created with little comics within them. The second table had underground comics, to me, these books reminded me of alternative comic books. There were a couple of adult comic books from the 70’s, little colorful zines made in the 80’s, and little interview comic books made just a couple of years ago. The third table had your basic comic books, Spiderman, Marvels, Riche Rich comic books. The last table had a poster like comics on them, the comics on this table were big with their drawings and the size of the paper the author decided to use. 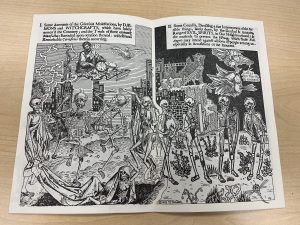 When we got set free in the Reading Room, I gravitated to the underground comics. I really liked all of the comics that were on the table because they weren’t your normal graphic comics that everyone thinks of. One of my favorite comic on that table was the “Crazy” Men comix by Michael R. Roden made in 1982. It caught my eye because of the red cover with the black lines on the front. The pages that made me think of lines were the two pages that had Dance of Death. I wanted to take a picture of these pages because of all the things that are going on both of the pages. On the Left page, the lines throughout that page add more depth to the skeletons with shading on their faces and bones. But when you look at the Right page, there’s not as much of that shading going on with the skeletons. There’s more of a bold look on this side with the darker thicker lines on the skeletons and plants.

The last comic I decided to use was the Zap Comix #8 by Robert Crumb. These comics were created in the 70’s but the one I decide to use was made in 1975. What I really liked about this comic was the use of the line on this page. The lines on this page add movement and texture in the comic that the text can’t. For example, of movement there’s a little spaceship in the second to last frame and to make it look like it’s moving the author added lines to make a path of where it came from. The example of texture in the comic is in the last frame in the comic. There are five businessmen acting tired, but when you look at their jackets and pants that they’re wearing the lines add texture to their clothing.