Page 45 of Poe: Stories and Poems by Gareth Hinds 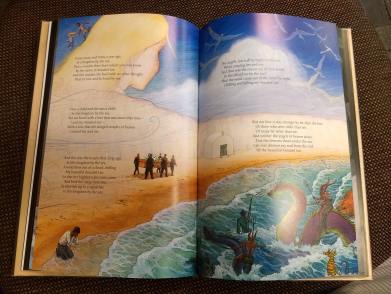 Pages 38 and 38 of Poe: Stories and Poems by Gareth Hinds

This portrays half of an entire poem in one image. It is displayed chronologically from the top the bottom of each of the pages. The progression of the main characters relationship with his wife is shown through the images in each section. In the first section, it shows them growing up together and falling in love. Under this it shows the wife dying and being carried away in a casket. Under this, it shows the husband crying while sitting by the ocean. After this it shows angels, and it talks about the death of his wife. Under this, it shows various sea creatures. The passage of time is not immediately apparent to the reader, but through viewing the image and following along with the story, you can see that there is a connection between the images and the text, but it’s not meant to be happening all at once.