The book I chose to read over October is a Manga called Berserk. I actually had interest in Berserk before we got assigned a reading of our choosing because a friend had recommended it to me. I purchased the first deluxe volume near the start of the semester planning on reading it but never did. What made me pick out this scene as an example of closure was its use of aspect to aspect, uncommonly used in western comics. Remember to read left to right as this is a manga. The first two panels perfectly fit aspect to aspect closure as its showing the same scene at the same time from two different angles to “establish a mood or sense of place” as Scott McCloud puts it (Understanding Comics). I specifically looked for aspect to aspect transitions being as this was a Manga and I expected to find some. 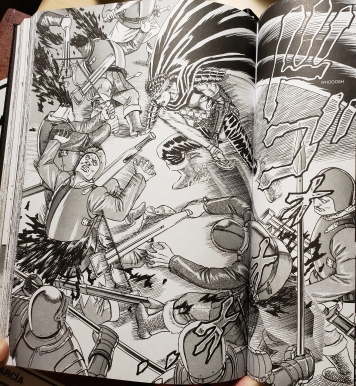 For an example of timescale I chose a giant multi-page panel from pages 394-395. In this scene, Guts the main character swings his comically large blade through multiple men. I picked this scene for its example of motion in a panel. Kentaro Miura uses the technique described in Understanding Comics of blurring objects in motion rather than motion lines. This scene shows one moment or one very short moment as shown by how the sword has already followed through the arc and is coming to the end of his swing. If you follow the trail of movement in this panel with your eyes you can see the trail of destruction it made from the men starting to fall apart and the lines of the men’s movement. This type of time frame of movement needed to be done in an extremely large panel to get the intended effect of the moment, forcing the reader to follow through with his eyes around the arc of the blade.