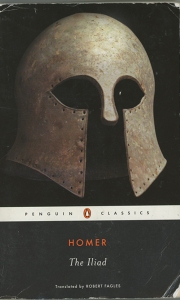 Homer’s The Iliad was written by Homer for the purpose of telling ancient Greco-Roman histories. I picked it up at the CUB.

The first day we visited the CDSC I brought with me a Crimzone Pass, Homer’s the Iliad, and one of my baseball hats. I really thought the crimzone pass would be a very interesting addition to my collage because it was so colorful. It also seemed like a collage in itself. It was also very small so I thought it would work a lot better than other larger things. Homer’s Iliad just had a really cool looking cover photo. Which featured an all matte black background with a single greco roman helmet in the middle. I also bought the book used so it had a ton of texture that looked like it would be very interesting. I was interested to see if the scanner would actually pick up all the markings on the cover photo. Finally the baseball hat I brought with me is an all grey Washington State University hat. I really like the stitching of the baseball hat and I thought it would fit in with my other items. I think as I scan more things the bigger picture will begin to develop more, but as for now I think this is a really good start. I ended up using my crimzone pass and Homer’s the Iliad because when I scanned all three of my items these two looked the best. Which i’m guessing is because they laid perfectly flat inside the scanner.  That being said the resolution and lighting just looked far superior in regards to the baseball hat. I’m really happy with how these photos turned out though. I plan on taking out all of the font inside the two photos. I like the background of the Crimzone pass because it is faded and is a splash of color. Homer’s Iliad features a really cool Greco-Roman helmet which I think is really as well. 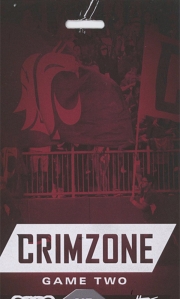 Crimzone Pass which was made and disbursed to students who wanted to have some of the best seats in Martin Stadium.I received this at the ticket booth.