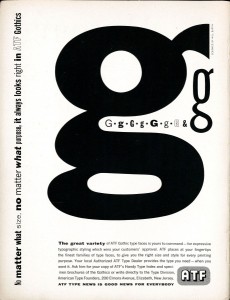 This advertisement for American Type Founders appeared in a 1958 edition of Print magazine.

The very first point the eyes are drawn to on this page is the massive “g” that covers the majority of the page. This element of type functions as point, line, and plane, since it is the focal point on the page, created from a line that has been curved and shaped to create a plane. As the eye moves around on this plane, it then notices a line created by a series of points. Each “g” functions as a separate point, but they are arranged next to each other to create that line. At the end of the line is a separate point, another “g” of a different size that appears more as a line curved into a shape, almost creating an echo of the larger “g,” but it is just different enough to separate it as its own shape. From this point on the far right side of the page, the eyes are pulled to the far left by the long line of text along the entire edge of the page. Each word appears as a separate point, especially due to the fact that each is in a separate style, such as condensed, italic, bold, etc. This is similar to the style used to create the line of “g” mentioned previously. Finally, attention falls on the block of text at the bottom of the page. This block consists of 8 lines and a point. The first and last lines draw the most attention since they are bolder than the rest of the text. Within the first line, it could be argued that the bold section of line creates a point since it stands out from the text and white space around it. Altogether, the lines form a square shape to appear as a plane. The final element to note is the “ATF” that is in the bottom right section of text. With the help of gray space around it, the white text outlined in black stands out in the corner as a final point on the page, serving as an end to the read. Overall, there is strong visual balance, despite the work being asymmetrical. It appears that the designer wanted to create rhythm through not only using the same letter multiple times, but also in using similar styles of displaying the points in both the line on the left edge of the page and in the middle extending right. Through this rhythm, they created a balance between each side of the page. The designer also eliminated awkward white space by adding the second larger “g,” that helps complete the balance by eliminating the opportunity for the eyes to get stuck on that section of the page. Despite the different weights of the typographical elements, the designer filled each section of the page with enough black to eliminate the unnecessary white space. By using strong contrast, the designer made the advertisement more visually interesting while simultaneously forcing the focal point to be exactly where they wanted it to be.

This entry was posted in Sample Posts by Students, Spring 2016 Archive (336). Bookmark the permalink.