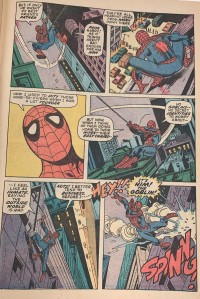 Our class visited the MASC to analyze their comics collections and try to identify concepts from Scott McCloud’s Understanding Comics. One of the concepts that I tried to identify is the use of line. The example that I found for the use of line is from “The Amazing Spider-Man, #98,” particularly in how the artist manipulates lines to convey emotion to their audience. What I find interesting about this example is that the author is able to manipulate the lines to give the audience a little glimpse at how it would feel to be Spider-Man. In these panels, the hero is shown swinging through New York City. The artist uses accents lines on all the buildings to highlight to the reader that they are slanted relative to the panels. As the reader follows Spider-Man through the skies of the city, an uneasy feeling builds and builds as the reader gets the sense that the heights get gradually more dangerous as the lines on the building gradually become more vertical. These feelings build until the panel where something crashes next to the hero on the building. This is just one example of how comics artists can manipulate lines to convey emotions.

Read Yourself Raw by Art Spiegelman