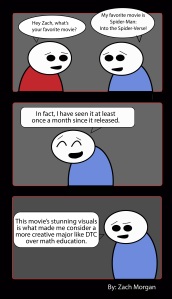 Coming into DTC 201, I had already taken a class in high school that utilized Scott McCloud’s Understanding Comics,so I came in feeling very comfortable with the topic of comics. However, I did not come into the course feeling comfortable with the creation of comics. As a result of this mixed experience, I felt like I kept having these great ideas for creative and interesting comics with no idea how to go about physically creating them. With that being said, after creating both a print and digital comic, one big takeaway I had was that it felt easier to make my comic with the modes of communication while creating the digital comic. With the print comic, it was harder to put my exact idea on the paper, so it was hard to put attention on elements of the comic other than the artwork. Overall, I preferred creating a digital comic because I felt like my lack of Adobe Illustrator skills were much less of a handicap on my imagination than my lack of hand drawing skills.

Like the creator’s experience, I think that there is a great difference in the experience between print and digital for the reader. The difference as the “viewer,” as Scott McCloud would say, is the suspension of disbelief that you feel. When reading a comic on a screen, the viewer is very much aware that they are reading a story and there can often be a lot of detail missed on a screen. Reading a print comic, however, allows the viewer to engage with the story through an added sense of touch, which enhances one’s suspension of disbelief. 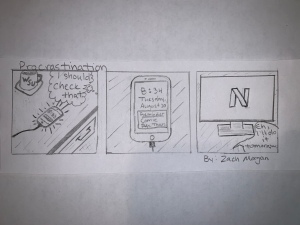 One aspect that stood out to me from reading Understanding Comicsis that McCloud makes the decision to have a character of himself taking the reader through the medium of comics. McCloud’s comic-self constantly speaks directly to the reader and makes himself very much the core of the book. When making my digital comic, I decided to make the last two panels consist of just me presenting a “fun-fact” and then explaining how the movie I talk about impacted my academic path.

Aside | This entry was posted in Fall 2019 Archive (201 Blog), Uncategorized. Bookmark the permalink.