Posted on November 27, 2018 by victoriahenrylemaster 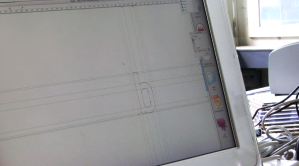 I think the most important thing about Helvetica is that time and time again in the documentary it is mentioned how it can be used for really anything. The versatility of the font creates endless possibilities for design use. No matter what project Helvetica is being used for it is used so universally that with any branding it usually can work. If you look at examples in the documentary-like American Airlines and American Apparel, both companies use the same font, however, they depict two completely different brand franchises. That is the repeated beauty of Helvetica and its ability to shape into anything that a brand really needs. It is acknowledged to be a dependable and consistent font. With contemporary designers, it was easy to understand how the font was able to shape a new form of design into the late 1900s. When it was first created Helvetica really was a font that turned around design. It was modern, clean, and contemporary. Helvetica can be thick, thin, serif or san serif, emphasized or italicized; it in its whole aesthetic is universal. One of the many typographers in the documentary described the font as almost an embodiment of humanity in a type. I think that in itself is beautiful, it now seems to fulfill that description purely. Helvetica is everywhere it is on street signs and billboards, it may really be on more pieces of paper individually more than people on Earth. Mike Parker,  a typographic developer described the design of Helvetia as being more than just a normal font that curves for random reasons but that there is a relationship with the foreground and background of the font.  There were some designers however that mentioned that because it has become so popular that it is overused to the point that it is “sickening” or too much. Though it was different and new when it first came out it was blown out of proportion. In my opinion, Helvetica is honestly really complex in its design even though it looks so simple. Pulling a quote from the documentary there really is little to nothing you could do to make it any better. It is universally concrete for a wide range of uses. I think that the documentary as a whole was actually extremely beneficial for learning more in depth of how other “real life” designers actually work on their projects and different tactics that are used. On that specifically, one artist mentions that the more restrictions you have that the easier the design becomes to create, I think that I will try and implement more of that thinking into me editing of my design so that I can really get each one really cohesive. The thing that I have a challenge with is working to be able to figure out what I want my restrictions to be. I feel like it is limiting my creativity as I have has a difficult time thinking about and working with my design, however, now that I understand it a little better I think that I may be able to understand what I really what the design to embody and describe in a more artistic and descriptive way. It seems as though my font would not be as orthodox and many of the earlier designers would like but I am okay with that, as long as it ends up being cohesive and full I will be successful in my own context.