Posted on November 1, 2018 by melissaurueta 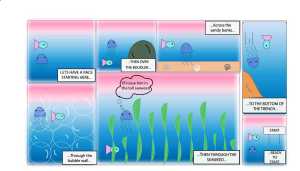 The great fish race by Melissa Urueta for DTC 201

My comic is a very traditional take on a comic. It fits into Scott McCloud’s definition because it is a bunch  of images in a sequencing order that is deliberate and mine tells a story. It is formatted in a traditional way in boxes and it is red from left to right and the story is then explained and easily understandable. Before I read Understanding Comics I first decided that I was not going to make my comic look like a comic I wanted mine to stand out. Then after I read it, I realized that the formatting should go along with the story the comic is trying to portray. The book made me understand that the comic is full of the symbols that help tell the story so the format does not matter. So when I decided to start my comic I had to come up with the story first in order to figure out the over display of my comic. I wanted to make something simple, a story about a race that takes place underwater. So I chose a simple format for a simple story. I then decided that I wanted it to be a normal comic strip that can be available for both print and digital media.

My comic can be understood in both and having the comic in either print or digital media will not affect the understanding or the comic itself at all. That being said, the best form to view the comic is print, more specifically like poster. It has two rows and there is no need for different pages. I hope when readers read my comic they will think that it’s cute and that the colors are pretty. I really wanted it to be a simple story line with beautiful colors. I wanted the vibe of the comic to be cute and colorful.