As one could imagine, the visit to the library’s archives provided a smorgasbord of material to digest and process, especially having been given the chance to use our immediate inspirations in our poster comic. The first comic that I sat in front of upon entering the room was The Sojourn, which had different authors with different comics within, but 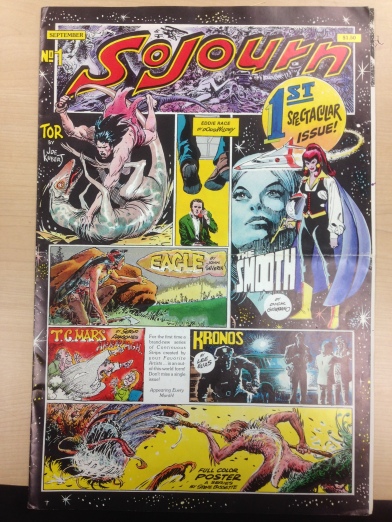 what drew me in was the character Tor by Joe Kubert, and how reminiscent he was of old Tarzan comics. My father used to read Tarzan comics when he was younger, and when I was really young, he brought his old comics for me to read, so having Tor jump out to me wasn’t a big surprise. It inspired me to make the character I was planning to portray even more attune with wildlife. After all, the character is vegan, so naturally he would be… well, nature-inclined. Another thing that inspired me to incorporate into my poster comic was the strong use of vibrant colors, and the power-poses done by characters like Dick Giordano’s The Smooth. While I’m not at all tempted to give my character a goofy costume, billowy sleeves and all, I am wanting to give him a powerful, almost anti-hero stance and more contrasted colors. Originally, I was going to use hues of brown and green, but I feel like that is too expected from the subject matter I’m dealing with. I’ve always been a supporter of using a lot of color, so I’m upping the use of blues, yellows, reds, oranges, etc., as seen in The Sojourn, as well as Will Eisner’s The Spirit.

Other examples I really wanted to incorporate were the indelible use of texture within this mini-comic,

and the weaponry and sheer-awesomeness of the character portrayed in the spread to the right. I know I want to use a lot of color, so I wouldn’t copy the black and white format they have, and I think, given the size we’re dealing with for our poster comics, I want to use a lot of textures to fill the space to its maximum potential. I think texture, color, and scaling are the three main components I’m working with for my poster comic, and I’ve been finding that they will be crucial for the size of the poster itself. Without texture, things will appear flat or uninteresting to me, and the colors will give more life to the piece, which is a proponent I want to convey, given that the character is a hero for the life of animals and the earth.