In design, scales can range from a printed piece as small as a postage stamp to as big as a billboard. No matter the size, your work must have its own sense of scale.  When we think about the meaning behind this, we consider both objective and subjective points of view. Objectively, scales are literal dimensions of a physical object, while subjectively they refer to the impression of the objects size 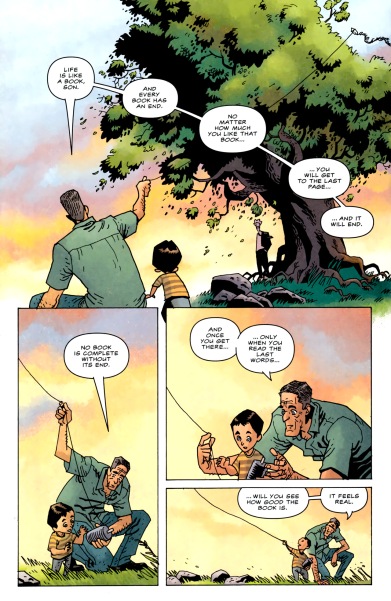 Page 17, issue #9 of Daytripper by Fabio Moon and Gabriel Ba

On page 17 of Daytripper , Fabio Moon and Gabriel Ba illustrate depth and movement by the size placement of their graphics and the color of elements surrounding them. In the first image, we see a tree with Bras’ father standing beneath it. The tree and everything around it is shaded to demonstrate that he is far away, and that their is a different emotion to that particular part of space he occupies within the scene. Surrounding him are warm colors that help to highlight and draw your eye to that section of the frame. Since we expect some objects to be particular in scale (familiar objects, familiar scale), it would appear odd that Bras father is much smaller than him if we didnt get that sense of depth that it is trying to provide, but it also gives us a sense of tension. Just by the difference in size, It appears he is observing this relationship from a far, and that his son, in a way, is reliving himself to be a bigger and better man than his father ever was to him. .

In relation to his grandson, Bras is much bigger which is a good example of relative scale because in this case we can observe bigger as older. This is also an example of a subjective point of view. Scale can also depend on context. In the last box, we see Bras hand his grandson the string and hold the kite all on his own. The dialogue on this page reads that life is a beautiful book that you wont know the ending of until you read the last page, and when you do, it feels all too real, so the empty space we see in that last scene punctuates the two boys and draws in its importance. The image itself is the metaphor.

This entry was posted in Spring 2016 Archive (336), Uncategorized. Bookmark the permalink.