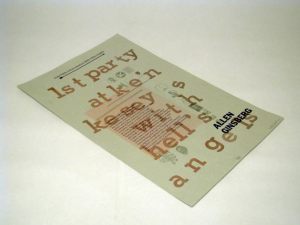 Nicholas Weidner designed this broadside for the poem “First Party At Ken Kesey’s With Hell’s Angels” by Allen Ginsberg. It was printed using letterpress at the Jack Sinclair Letterpress Studio at the University of Arizona using four different colors of ink.

Like many of the examples in Kyle Schlesinger’s essay, this broadside by Nicholas Weidner features poetry, uses letterpress printing, and is printed on a single, large sheet of paper, suitable for hanging on a wall. It is certainly part of the literary tradition of broadsides that started in the United States in the 1960s and 70s. The size of the paper and the letters encourage communal or semi-public reading, perhaps in a space such as a gallery, or even outside. The design of the broadside uses display type (larger size type) for the poem’s title and author, as well as smaller type for continuous reading of the poem itself. Small icons or images are also used, and are very well integrated into the text: One could argue that total immersion of text and image occurs on this broadside. The display type features the title of the poem, First Party at Ken Kesey’s House with Hell’s Angels, but it also serves as a very active visual element: The words of the poem’s title are spread out to fill the vertical height of the broadside, and the letters that form each word vibrate up and down slightly, rather than sitting on a shared baseline (also note the uneven kerning between the letters). Through this nontraditional handling of type, the letters are activated so they evoke the excitement and chaos of the party in the poem: Perhaps they evoke the “beer cans bent littering the yard” or the “twenty youths dancing to the vibration through the floor.” Display type is also used in the lower right corner to show the author’s name, Allen Ginsberg. This type uses regular letterspacing and an even baseline, but it still has a strong visual function, adding visual weight to the bottom of the poster to ground the viewer’s eye.

Schlesinger says that “the text is an image and the image is a text” when total immersion of verbal and visual elements take place. On Weidner’s broadside it’s important that the small images/icons are printed at the same scale as the display type. The fact that they are of similar proportions allows the viewer to see them as equal partners. They seem to tell a story just like the words do, evoking the possibility of drunken visions (the octopus-like creature shown in the detail image), toxicity (a skull and crossbones in another part of the broadside), and the specificity of individual people (photographs of people’s heads). Finally, overlap and layering of the display text and the images over the body of the poem, which is signaled by its placement in the faded red box at middle left, also works to create visual chaos that is evocative. Note that the text remains legible throughout, though the reader may have to work a bit harder to read some of the lines. This added effort seems appropriate for the subject matter and mood of the poem.

This entry was posted in Sample Posts by Your Professor. Bookmark the permalink.